Yesterday, my white rabbit, Stew, aka Hazel, but mostly Stew, died in my arms while we were at the vet. She’d been acting weird for the past few weeks, some days happily hopping around her indoor pen, while on other days having no interest in food or me. Yesterday, her breathing became labored and she couldn’t move his hind legs. Chris and I took her the vet and while I was waiting she died in my arms.

A little background on Stew. On October 6, 2014, a friend and I found a cardboard box in the marsh along Elsie Ave. Inside was a frightened white rabbit missing a toe. 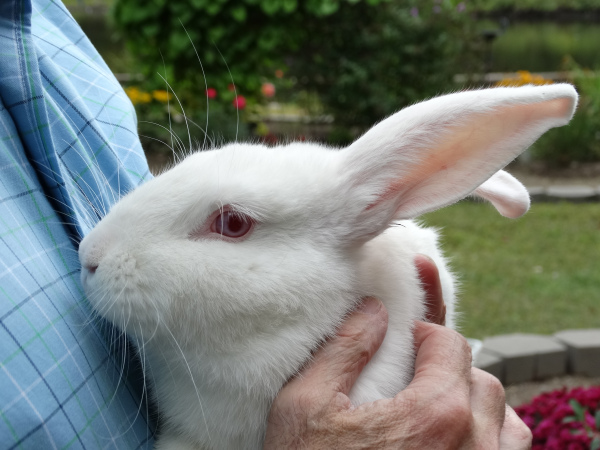 Hazel, when we found her, which I thought was a him. Stick around and I’ll explain her gender and name change.

Sparky was alive when I found Stew and they got to know each other rather quickly. Now they’re both gone.

On October 30, 2014, Stew helped me build her pen which I kept in my office. She had the run of the house back then and learned to use his litter box rather quickly. She was a good little bunny.

Stew, checking out her new Wabbitat.

This is how the name and gender thing happened. I originally named Stew Hazel, from the rabbit in the book, Watership Down, by Richard Adams.

I love this book.

Chris thought the name Hazel was a bit odd, and pointed out a better name would be Stew, since Hazel is a rabbit and rabbit stew is delicious. Thus, Hazel became Stew.

In January, 2017, I had a hysterectomy, and Stew went in to be snipped. Surprise, surprise, he had no penis but two, well-developed ovaries. Can you say Stewina?

Things have been rocking along since Isabella arrived. Stew loved the company. I eventually built them an indoor run down in the basement and a second run outside for the summer months. They had a ball and every time I visited them Stew would hop over to me and cuddle. He loved to have the space between his ears scratched. He was a sweet little bunny.

But now Stew is gone and Isabella is alone. I’ll take a drive to Nevins Farm, the MSPCA adoption center in Methuen, and adopt another rescued rabbit for Isabella.

Did I mention Stew died in my arms?

I hope your soul is hopping around in the green fields of Summerland, Stew.

Wondering, searching, and wandering, I'm an earth witch with a desire to get it right in my lifetime. The flow of the river feeds my inner goddess and fuels my soul. Blessed be. :}
View all posts by tinthia →
This entry was posted in Life on the Concord River and tagged domestic white rabbits, Himalayan rabbits, lifespan of domestic rabbits, my rabbit is breathing hard, my rabbit is sick, Nevins farm in Methuen MSPCA, pets and animals, putting my rabbit to sleep, rabbits as pets, rescued rabbits. Bookmark the permalink.

1 Response to Time to Say Goodbye