Punxsutawney Phil may have been wrong.

Two Red-winged Blackbird males flew in today. They’re the first Spring arrivals to the Concord River and prove, without a doubt, that Winter is getting ready to say farewell. Punxsutawney Phil was wrong! 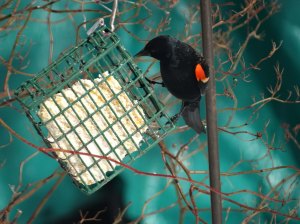 Red-wings travel in flocks so I’m expecting more to be punching in from their winter home of central United States. Soon the marsh will be alive with the calls of the males, establishing territories and awaiting the arrival of the females, bringing up the rear sometime in early March.

The bluebirds are still here, however they don’t seem the least bit interested in the $14 dried mealworms I put in the new $12 feeder. To entice the birds, I added some berries to the worms. The bluebird picked out the berries, leaving the mealworms. Do you think Chris would notice mealworms in his blueberry muffins?

Berries in the mealworm feeder don’t seem to be doing the trick.

While at the Essex County Co-op to get cracked corn for the ducks, I purchased a bluebird nesting box. I’m told since bluebirds prefer fields, it’s unlikely they’ll  stay and nest. If not, no harm done. Maybe I’ll get a pair of swallows or perhaps the chickadees will use the box. As long as the sparrows leave it alone. It’s not that I don’t like house sparrows, it’s just, being a very agressive species, they tend to bully the other birds. Even in the bird world, there’s bullying. Perhaps I should bring in a consultant to give a workshop.

At least the Bluebirds are still hanging around.

As the proud owner of a new ergonomically designed roof rake, I am officially a member of the Homeowner’s with Inefficient Tools Club. 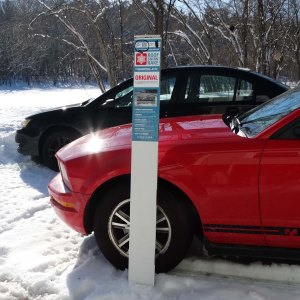 According to the package, the rake has been designed for easy snow removal with reduced neck and shoulder strain. Hmmmmm, I must have been using it wrong. At the end of two hours, the roof still had lots of snow and my neck and shoulders were screaming. My back wasn’t too happy either. Granted, it didn’t help the snow had absorbed all the moisture in the Universe. Okay, maybe not ALL the moisture, but a good portion. The snow was damn heavy and perfect snowman snow – sticky!! 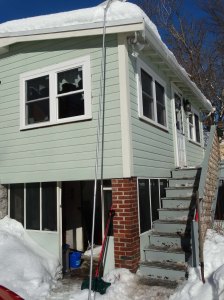 Wow! My back steps need a good painting!

At one point, the lightweight, 18 foot, aluminum pole with the patented shovel head (translation: top-heavy, wobbly pole) fell backward, taking me with it. Sinking down into the moisture-laden snow, with my arms overhead and hands still holding the rake’s pole, which had sunk six inches into the snow, I was trapped. With Chris still in bed and no rescue in sight, I contemplated my fate. Remain in the snow until he discovers I’m missing (since it was 9AM, that wouldn’t be happening anytime soon) or suck it up and rescue myself. Hey, if a young man stuck in a cave can cut off his arm with a pocketknife, I could free myself from a snowy encasement. It only took 20 minutes and the loss of one boot, but I did it!

Two hours later, with about 10% of the job completed, I had an epiphany: Let Mother Nature melt the rest! I wonder if I can get a refund?