Over 60 inches of snow has fallen this season and it’s only February. Truthfully, I’m tired of snowblowing (But VERY grateful to have one!). I need to see green grass, smell roses, and feel the sun on my neck. I’m sure the ducks would also appreciate some sun on their backs, instead of snow. 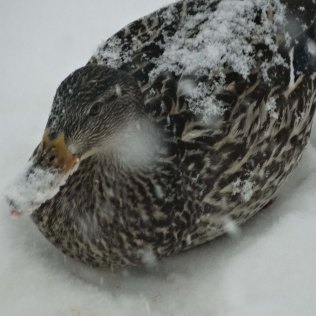 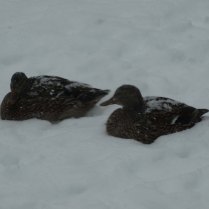 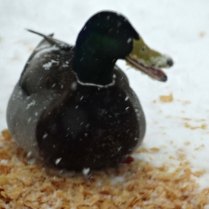 “Can we get some milk for this cereal?”

During the snowstorm, I thought the ducks were trying to commit suicide. They sat on the ice and allowed the snow to bury their bodies. The thought crossed my mind to run out and save them. However, visions of falling through the ice and being carried to the Lowell Locks, and ultimately into the Merrimack River, brought me to my senses. Instead, I made some tea and kept a vigilant watch. By dusk, they were gone and I could rest easy. 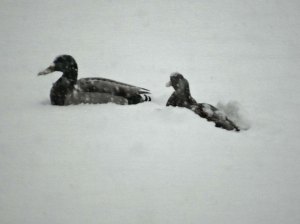 The snowstorm brought a surprise in the form of Eastern Bluebirds. Back during my celebration of the Winter Soltice, I put red winterberries in pots and deck boxes. Typically American Robins will eat this kind of berry, but I didn’t know bluebirds liked them too. Sure enough, four adults and a juvenile appeared and ultimately cleaned-out every last berry. They even stayed around to enjoy the suet.

It’s amazing what a snowstorm will deliver.

Waiting for a turn at the suet.

Finally getting a turn at the suet.

Rearview of juvey bluebird (see, it has two legs!). 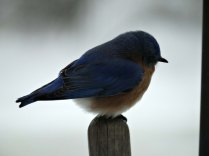 If I can get to Lowe’s before work, I’ll buy some mealworms to entice them to stay.  Maybe I’ll get a couple of nest boxes too. Baby bluebirds would be so very cool.

While at Lowe’s I need to buy a roof rake. Since the roof is pitched, a cave-in isn’t an issue, it’s the ice that’s forming on my stairs. Two days ago I slipped and landed on my butt. Good thing I spend my Sunday nights with Ben and Jerry. Actually, I try to visit with them as often as I can. Truthfully, they’re the only guys who could get me to put out on a first date.

The end of the snowstorm brought a clear night sky and georgous waning moon. Its brightness provided enough light to take the dogs for a walk. The snow crunched under my boots and the air was crisp and clean. In retrospect, this snowstorm was pretty darn awesome.

Wondering, searching, and wandering, I'm an earth witch with a desire to get it right in my lifetime. The flow of the river feeds my inner goddess and fuels my soul. Blessed be. :}
View all posts by tinthia →
Gallery | This entry was posted in Life on the Concord River and tagged american dream cone ice cream, another snowstorm for Billerica, another snowstorm for east coast, Ben and Jerry, Ben and Jerry American dream cone ice cream, Ben and Jerry's ice cream, bluebird eating winterberries, bluebirds eat winterberries, Concord River Lady, do bluebirds lose their color in the winter, ducks sitting in snow, Eastern Bluebird, February 18 snowstorm, juvenile Eastern Bluebird, Lowe's, mealworms for bluebirds, raking snow off the roof, River Lady, roof rake, snow on the Concord River, waning moon, what berries to bluebirds eat, what do bluebirds eat during the winter, what type of berries will bluebirds eat, winterberries for birds. Bookmark the permalink.