That which does not kill us makes us stronger.

Nietzsche must have been speaking about plumbing when he penned this statement. If not, I’m sure he would have agreed that plumbing issues would definately qualify.

The morning started with a blocked toilet. It should have been an easy task. A little elbow grease, plunger designed to clear any toilet blockage, water flows out of toilet. Bingo. Well, as I’ve learned over the years, things don’t always go according to plan. Oh, the water did flow out of the toilet, but ended-up in the shower! Not one to panic, I just shook my head and thought about buying some ice cream. I wish Ben and Jerry were plumbers. 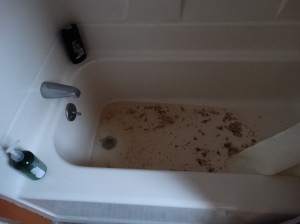 Round two. More elbow grease, more plunging and the water disappeared. Down the pipes out into the sewer system. Or, so I thought. Turns out the sludge, waste, yucky water, sh-t, ended-up in the basement! What is up with my little house and water in the basement?

Many frantic phone calls later and the problem was revealed. It seems my E/One pump failed and resulted in a major back flow problem. Since my personal household waste couldn’t go forward, it took the route of least resistance. Sigh.

So what’s an E/One pump? It’s a grinder pump that pulverizes household wastewater into “slurry,” (the manufactuer’s word, not mine). Hmmmm, didn’t Harry and Sally sing about slurry?

Anyway, according to the manufacturer’s website, my E/One pump has been designed and built for “several years of trouble-free service.” Since the pump is only three years old, it would appear we disagree of the definition of “several.” Finally, all E/One pumps come with an alarm system that signals the homeowner should the pump fail. Darn, if only the alarm had worked, I wouldn’t be cleaning-up unslurried slop.

So, the saga continues. Today, Thursday, January 9, I’m waiting for F.R. Mahoney, the manufacturer and distributor of my E/One pump, along with the construction company who installed it. And, since “trouble-free service” is their goal, it will cost me $180 before they even set foot on my property. Again, we seem to disagree on a definition.

Wondering, searching, and wandering, I'm an earth witch with a desire to get it right in my lifetime. The flow of the river feeds my inner goddess and fuels my soul. Blessed be. :}
View all posts by tinthia →
This entry was posted in Life on the Concord River and tagged E-one grinder pump, E-one pump, E/One Pump, F.R. Mahoney, my E-one pump failed, Nietzsche, surrey with the fringe on top, that which does not kill us makes us stronger, wastewater in my basement, what do I do when my E-one pump fails, what doesn't kill us makes us stronger, what is an E-one pump, when harry met sally. Bookmark the permalink.