Did I miss a memo or email? One day I’m feeding a hungry horde of ducks…

…and the next day, none! Not a soul. Hurricane Florence blew through and took my ducks with her, I think. I fed my flock of close to one hundred beaks in the late afternoon, during a downpour, I might add, (Who’s more dedicated than me?) and the next day, when the sun was shining, I was duckless.

Three whole days and not a beak to be seen.

I was starting to feel abandoned and even told my son my tale of woe; he said to get a grip and move on.

Thank you, for coming back. Where are the others?

Not as many as I’d hoped, but I’ll take what I can get.

While I’m on the subject of my ducks, take a look at the first photo, up above. See that little duck with the teal blue feathers? Go ahead and look, I’ll wait.

(soft humming in the background)

Ready? Well, that little guy is a wood duck in its eclipse plumage. 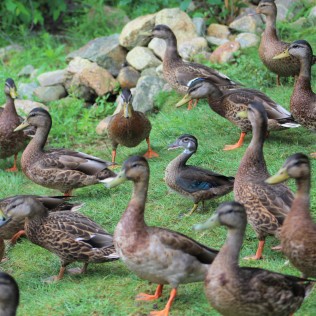 This is what a wood duck looks like when he’s strutting his stuff and hot to get laid. By now you should have figured out this is not a PG-13 blog.

When he’s just chillin’, he sheds all the finery and wears a more sedate coat of feathers, called his eclipse plumage. 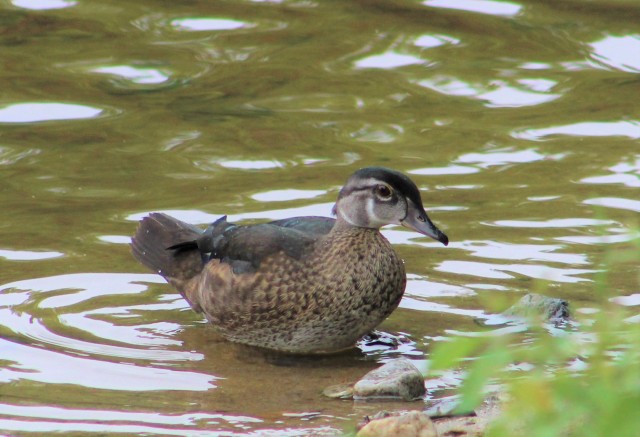 He’s just a tiny little thing, about half the size as the Mallards, but that doesn’t stop him from being feisty. Look carefully and you’ll see him show the big guy who’s really the boss. 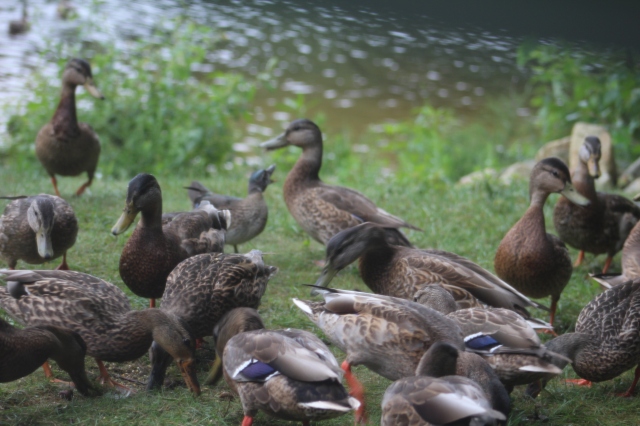 Along with the ducks, other feathered friends that have left me for greener pastures.

The heron, like the ducks, left after Florence blew through down the river. 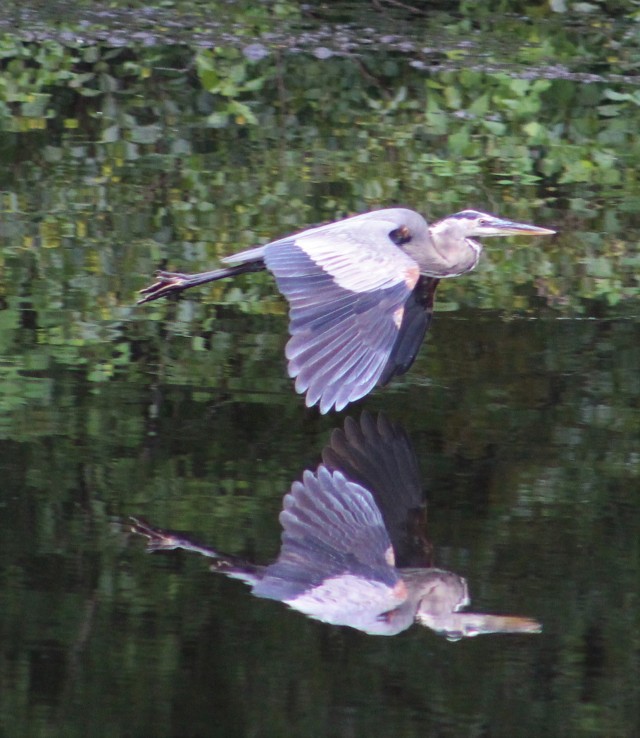 The ruby-throated hummingbirds are on their way to their sunny vacation spots too. They’ll travel around 3,500 miles to reach their destination.

Considering they’ll travel approximately 1,300 miles each day and their wings beat approximately 70 times per second, hmm, let me see, carry the 3, drop the 7, divide by infinity, multiply, find the square root…… Wow! They’re wings beat a lot during their migration!!!

Have a safe flight, little one.

Oh, and let’s just put the wives tale about hummers riding on the backs of other birds during their migration. Nope! These little wonders do all the work themselves. They rock!

Hummingbirds have strong wings for such delicate songbirds.

As for my furry companions, the chipmunks are still destroying my yard and the mice are still chewing my insulation. One got himself caught in the bin I use for the cracked corn. The poor guy took a tumble to the bottom of the can and found himself trapped.

Since he wanted to be with the corn, I left him there and dumped 50 pounds on top of him.

I set him free; what kind of earth witch do you think I am? 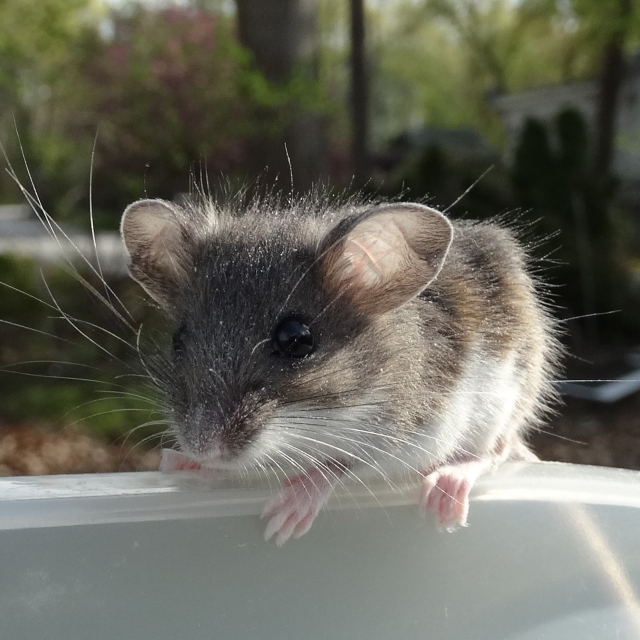 Before I end this post I need to give a shout out to my son and my friend. This mysterious neurological condition of mine is holding me back from taking care of my house and gardens, and without these two wonderful men the place would be in ruins. My son comes over every week and performs whatever chores I need done, like the time he put up my screen house. 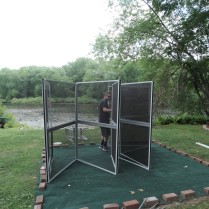 Lately, he’s been helping me expand my gardens. 300 retaining blocks and four yards of dirt and not one complaint! (pictures to come)

My friend rescued me by repairing the sump area in my basement.

I remember when I could do these things by myself but those days are gone, for now at least. I’m trying to get stronger, though, and who knows, maybe next spring, when I place the second order for 300 more retaining blocks, I’ll be able to move them all by myself.

Until then I’ll act as foreman. Blessed be :}

Wondering, searching, and wandering, I'm an earth witch with a desire to get it right in my lifetime. The flow of the river feeds my inner goddess and fuels my soul. Blessed be. :}
View all posts by tinthia →
This entry was posted in Life on the Concord River and tagged animal blogs, do hummingbirds ride on other birds backs, feathers, field mice, flight, herons, how far does a hummingbird travel in a day, how many times does a hummingbirds wings beat, Mallards, nature blogs, photography, plumage, River Lady, ruby-throated hummingbird migration maps, strong women, wild birds, wildlife photography. Bookmark the permalink.

5 Responses to Fine, don’t say goodbye, see if I care!