Once in a blue moon!

Last night was a full moon, the second for July, which made it a blue moon. This loose definition of a blue moon comes from the March, 1946 issue of Sky and Telescope magazine.

The traditional definition, according to the Farmer’s Almanac, is when a third Full Moon occurs in a season with four full moons. A season is defined as the time period between a solstice and an equinox, or the reverse.  I prefer the ‘two in one month’ definition. It’s easier for my old brain to wrap itself around. 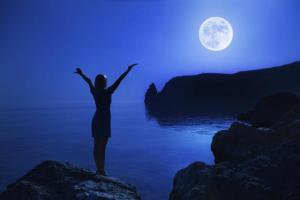 According to the old ways, a person should embrace the blue moon by taking part in a new experience. Eating a new food, dancing naked, or talking with someone with whom you would never hold a conversation. I chose to go a more dramatic route and spend the day at the emergency room of the Lahey Clinic in Burlington, Massachusetts.

Yup, my new, certified pre-owned RAV4 was slammed from behind by a massive pick-up truck. I was minding my own business, sitting patiently at a red light, when Mr. truck driver used my car, instead of his brakes, to stop.

Thank you to all the handsome firemen who came to my rescue, along with the kind owner of a nearby hair salon, and the patient policeman. Along with the staff of Lahey, the whole ordeal was quite pleasant (HA!) While in my comfy spot in the emergency room aisle, safely tucked on my gurney, wearing a very fashionable neck brace, Chris took control, handling the towing of the car, while interacting with the hospital’s security guard. My son rocks.

Damn, a pink brace would have been more fashionable.

So, there you have it. A blue moon ritual, the likes of which I would never have imagined. It could have ended badly, besides a case of whiplash, a headache that makes me dizzy, and a flattened rear end (the cars, not mine), with a blown out window, I could have lost much more than a car and a day.

1 Response to Once in a blue moon!