And summer’s lease hath all too short a date!

June 21, 2015. First day of summer. The longest day of the calendar year. When the light outshines the darkness and the sun (in this case hidden by clouds) shines on my corner of Mother Earth for about 12 hours.

This post will be lengthy. I’m just warning you. Get a cup of tea, glass of wine, or some vodka and settle in.

I had the brilliant idea that owning a screened gazebo would be cool, and functional. The mosquitoes get pretty bad in the evening but it’s soooo wonderful to sit outside and enjoy the sounds of the night critters along the river. Five hours later, including the hour to dismantle part of it (the freaking labels marking parts A, B, and C tend to fall off in transit!), the Casbah was open.

One week later, due to some consistent rain, the Casbah was closed for renovations. In this case, dismantling. 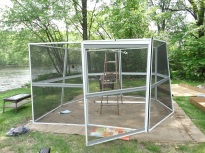 So far, so good. Today’s rain isn’t even making a dent in the roof. Oh ya!

The nursery is finally open.

Franny and Harry never procreated. They’re still around, acting like the king and queen of the yard. But, alas, no ducklings. I swear Franny is taking birth control and was just leading Harry along.

Franny and Harry don’t seem to be concerned that their genetics  stops with them!

The ruby-throated hummingbirds have finally made some appearances at the feeders that allow me to capture with the camera. Up to now I would hear them behind me but, like wisps of smoke, disappear when I turned around.

Isis is here each day. Yesterday she decided to investigate the tree branches. Since herons build their nests in trees, perhaps she was looking into placement of hers. Of, maybe she just wanted a better view of the river. One never knows what goes on in a great-blue heron’s mind.

“I can see my house from here!”

Time for a little perspective. Just four years ago tomorrow (June 22, 2011) I underwent hip replacement surgery. I am the proud owner of a titanium right hip. The bionic woman has nothing on me!

Although I can’t jump as high, or run as fast as Jamie, I’ll bet she can’t beautiful gardens like me. In keeping with the topic of gardens, remember the one I built last August?

Well, here she is now!

The ducks still use her as a feeding pen though. 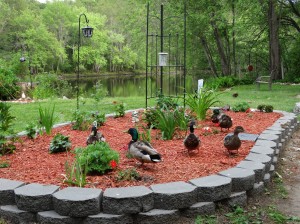 “These plants get in the way of the corn!” 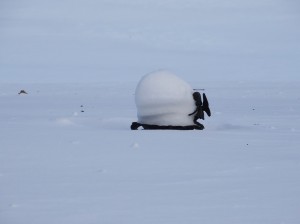 Or, how about March?

Now, lookee at May!

My hummingbird garden is so pretty.

I must give a big shout out to Tewksbury Florist and Greenery on Main Street. I discovered them last week and man, do they have a huge assortment of perennials! Thanks to them I’m well stocked. If you’re ever in the area, stop by. You’ll be glad you did (this is beginning to read like a commercial).

Hmmm, let’s see if I’ve missed anything. The ants are still doing what ants do. The house still isn’t painted nor is the deck refinished. Stevie continues to grow into a really cool dog. 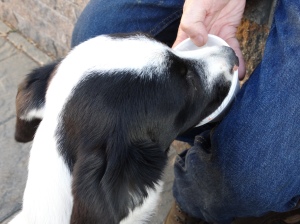 Penny is still shy and the river still flows north, toward Lowell. I’m thinking of getting a small row boat. The canoe I have is too big for just me alone, and Chris has lost interest in paddling on the river. A man stopped by in an Amesbury skiff the other day and I fell in love (with the skiff, not the man, although he was cute).

When I checked out the prices online, my heart almost stopped. Too rich for me I’m afraid.

As long as I’m on the subject of cute men, I would like to shout out to Steven Spielberg and ask why Chris Pratt didn’t take off his shirt in Jurassic World? I know I’m not a fancy pants director, but I do know a good piece of eye candy when I see one. 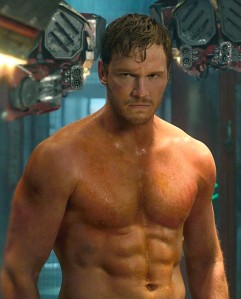 Oh well, back to reality. Ants, ducks, dogs, and a rainy summer solstice.

3 Responses to And summer’s lease hath all too short a date!