That’s it! No more, no less. Just one small, fuzzy, squeaking duckling. And to add insult to injury, it wasn’t even Brad and Angie’s duckling but some unknown hen. All my tender care. All the cracked corn. All the anticipation. Oh well. 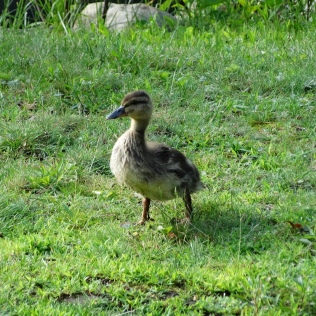 Sure is a cute little duckling.

Mama was very protective of junior (or whatever a small female would be called), except when her life was in danger. Allow me to explain. (Ahem) I was feeding the ducks one fine morning. Everyone was enjoying their share of cracked wheat bread. Mama hen meandered down the river with her chick in tow and joined the crowd. 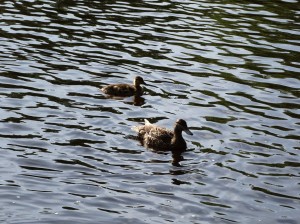 Mama and chick arrive for breakfast.

With her arrival, things started to heat-up a bit. The other ducks didn’t care if a duckling was present. Where there’s food, there’s survival, and chicks be damned. Mama defended her tiny brood with impressive moves. At this point I decide to name her Gina (after Gina Carano, my favorite mixed martial artist).

This is where it got good. A carp the size of Rhode Island, who had been feeding on the bread balls I was dropping into the water, decided it wanted some protein to go with the carbs and pulled one of the drakes under the water. Just pulled it right down! The duck was there and then it wasn’t. Gone! Well, you would have thought a shot had been fired. The duck (now under water) let out a quack loud enough to be heard in Concord, and everyone else took off for the beaches. Half of them flew to my beach, and half of them onto my neighbor’s beach. Including Gina! (The real Gina would have stomped that carp!)

“Wow! Did you see that? Fred was there and then he was gone!”

The only duck left on the water was the chick! He’s (she’s) frantically calling from the middle of river. Gina’s on the beach calling back, and I’m sitting on the wall taking pictures.

The pulled duck (Hmmmm, why am I suddenly hungry?) shot out of the water like a bullet and headed toward Lowell. Gina eventually flew to the chick and all the other ducks came back into the water to finish their meal. 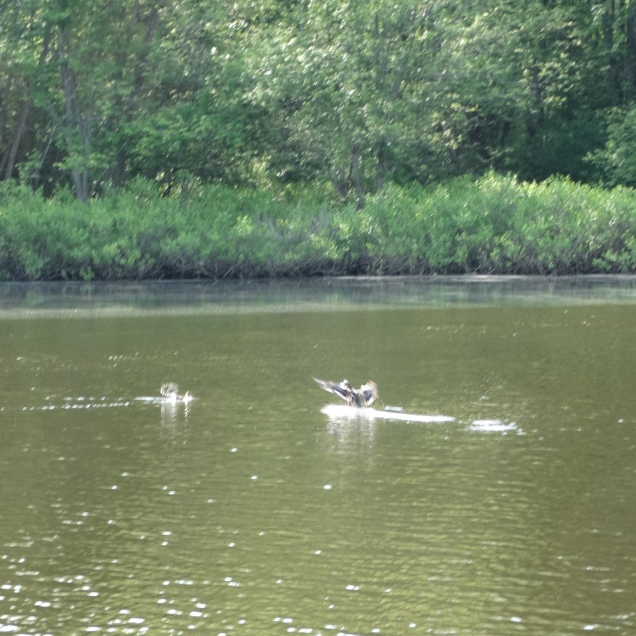 When I told Chris the story he said it would have been cool if the carp had grabbed the chick and re-enacted the opening scene to Jaws. Yes, I did laugh when I envisioned it, but I’m glad it didn’t happen. Sigh. I really don’t want to come back in my next life as a duck! Blessed be. :}