Summertime, and the livin’ is easy.

The fish are definitely jumpin’, and the thistle is high and in bloom, with a brilliant splash of yellow on the white, downy puffs. I’m sure Gershwin would have written a song or two about such a marvelous sight. 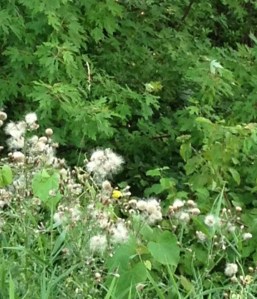 This is the time of the year when the American goldfinches build their nests. Both the male and female will find a nesting site but only the female will construct the nest, using spider silk and seed husks for building materials. Her clutch will average seven pale, bluish eggs, and the young finches will hatch within two to three weeks. Goldfinches are not only unique in the lateness of their nesting habits but also in what they eat and feed their young. American goldfinches are vegans, having a strictly plant based diet, such as thistle, sunflower, black-eyed Susan, and aster seeds.  The young are also raised on seeds, not insects like most song birds. If a brood parasite bird, such as a cowbird, lays an egg in a goldfinch nest, the young cowbird will quickly die, due to the vegetarian menu. Ahh, Mother Nature, your ways are wily.

Since I’m on the subject of laying eggs, I was visited by a large, (let me stress LARGE!) painted turtle the other day. She was digging a hole in my lawn and I can only guess her intent was to lay a few eggs. It must have been the photographer hovering around that caused her to change her mind.

Digging a hole for eggs (maybe).

When she decided to leave, the retaining wall messed with her GPS. She walked right, then left, then right, then left, ….. I made a cup of coffee and watched the show. After an hour it was time to lend a hand. Now, this isn’t Animal Planet and I’m not going to pick up large turtle. Instead I used my snow shovel. It took some persuasion but she eventually settled down and allowed me to carry her to the beach. Once on the bank she ran down the sand and into the waiting water. She moved pretty damn fast for such an old lady. Very impressive.

Life on the river sometimes spreads out on the road, which is not always a good thing. Snakes, turtles, toads, and birds have met untimely deaths on my street. Many of the drivers think they’re in training for the Indie 500. There was a garter snake that had been hunting in my side garden for the past two weeks. It’s not hunting there anymore, as it became the most recent casualty on the road. Why the heck didn’t it just stay in the yard? Arghhh.

My garter snake, when it was alive.

This topic leads me to the ducks. What do smashed animals have to do with ducks? Nothing, really. I’m just ready to write about my ducks, of which I have plenty. Some days over three dozen!! One of them, who I’ve named Hobby, only has one leg. Chances are there’s a snapping turtle in the Concord River who had a duck leg snack.

I try to feed him more than the other ducks, but when there’s dozens of ducks running around and they all have two legs, a one-legged duck doesn’t stand a chance. He’s a trooper though, hopping across the grass to get the bread ahead of the swarm of flapping wings. I’m working on shooting (no, not ducks) a video of the hungry hordes. Keep a weathered eye out for it.

At night the ducks sleep on my beach, periodically quacking out loud. I lie in bed and wonder what causes them to do that. Perhaps they have dreams of running and playing, like Chris used to when he was young. Or maybe they call out to make sure they’re not alone. Whatever the reason, when I hear them, I smile, knowing they’re out there and I’m not alone.

Getting ready for bed.

As I put this post to bed, the moon is peaking through the clouds. Although she was full last night, she’s still a stirring sight tonight. Known as the Blessing Moon, the July full moon guides us to our intuitive gifts. (There, did you hear it? A quack! Listen closer next time and you’ll hear them.)

“By the light of the Moon, my dreams are clear; All that I hold true in my heart are near; Guide me oh light in the dark July sky; I hear you whisper to me, as soft as a sigh.”

Wondering, searching, and wandering, I'm an earth witch with a desire to get it right in my lifetime. The flow of the river feeds my inner goddess and fuels my soul. Blessed be. :}
View all posts by tinthia →
This entry was posted in Life on the Concord River and tagged American goldfinch, blessing moon, brown-headed cowbird, concord river, cowbird, full moon, garter snake, George Gershwin, Gershwin, goldfinch, mother nature, painted turtle, Porgy and Bess, road kill, snapping turtle, summertime, the livin is easy, thistle, toads, vegan. Bookmark the permalink.